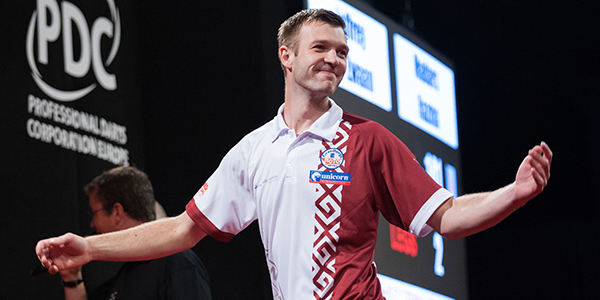 It has been some long months. Darts has not been the same, and will certainly not be in the near future, but over the last five days PDC has held the very first Summer Series ever.

The event, which consisted of five Players Championship events, was won by Peter Wright, as he ended up as number one in the rankings, even though Michael van Gerwen won two of the events and Peter Wright only won one. The two other events were won by James Wade and Ryan Joyce. This was the first ever Pro Tour win for Ryan Joyce.

The PDC Nordic & Baltic region was also represented, as Madars Razma and Darius Labanauskas both attended the five events.

At the first event, Players Championship 9, Danny Noppert proved to be the evil spirit of the Baltic players. The Dutchman won against Darius Labanauskas in the first round and then went on to beat Madars Razma in the second round.

At Players Championship 10 Darius Labanauskas once again lost in the first round. However it was a close match against Dirk van Duijvenbode, who won the match by 6-5.
Madars Razma had a great day however. He started the day off by beating Kim Huybrechts and Devon Petersen in the first two rounds. In the third he was up against Gerwyn Price and won that match by 6-4. In the fourth round he unfortunately ran into the later winner of the day, Ryan Joyce, and lost 6-5.
This was the best result for Madars Razma at a Players Championship event this season. Only Daniel Larsson from the PDCNB region had earlier accomplished to reach the fourth round in the season.

Unfortunately Players Championship 11 was over quickly for both players, as they both lost in the first round of the event.

The bad streak for Darius Labanauskas continued at Players Championship 12, as he once again lost in the first round. He averaged a good 96.3 against Robert Thornton, but unfortunately for the Lithuanian Robert Thornton averaged 100.5 and won 6-4.
Madars Razma made it into the second round as he beat Christian Bunse in the first round. Then he was to meat Jose De Sousa in the second round in a thriller of a match. Even though Jose De Sousa missed D12 for a nine-darter, he quickly went up by 5-1. But then his doubles went missing and Madars Razma was not slow to take advantage of that and got himself up to 5-5. In the deciding leg both players had some trouble with the doubles, but in the end Jose De Sousa took the leg and thereby the match.

At Players Championship 13, the fifth and last event of the Summer Series, Darius Labanauskas finally got some redemption, as he won his first match of the Summer Series against Stephen Bunting. He then went on and won 6-4 against Steve Lennon in the second round averaging 100.9.
In the third round he was up against Gerwyn Price, who played some magnificent dart and won the match by 6-1 averaging impressive 113.1 against the Lithuanian 92.0 average.
Madars Razma managed to get a little further in the event, as he got himself into the fourth round before being defeated. Even though he had played some good darts in the first three rounds, something went bad in the fourth and therefore he lost 6-0 against Scott Baker.

And then we end things with a educational tweet from the PDC:

?Next time you have to mark in the pub, remember that even the World Champ has to do it sometimes! pic.twitter.com/aYa5fQUdBr