Fine weekend for Razma, Labanauskas and Kantele at Players Championship 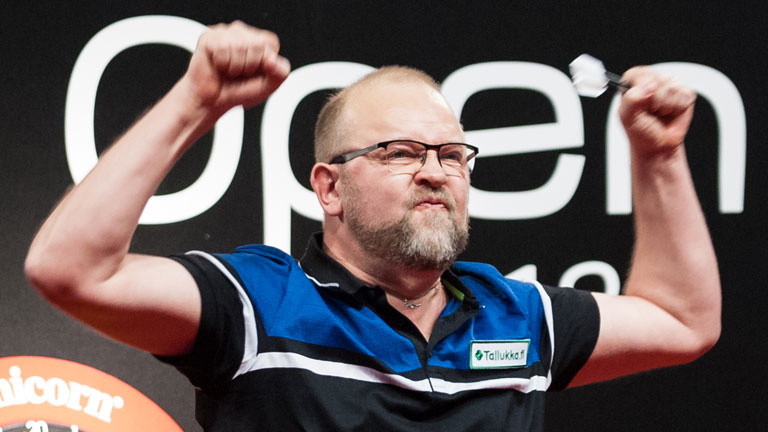 The PDC Nordic & Baltic was once again represented at Players Championship this weekend.

This year there is no less than 30 Players Championship events before the Players Championship Finals in November. This weekend number 21 and 22 were played and just as in the former 20 events, the PDC Nordic & Baltic region was represented by Madars Razma, Darius Labanauskas and Marko Kantele.

At event number 21, at Saturday, Madars Razma showed a great level. He won his first match against Benito van de Pas by 6-0 and averaged impressive 101.3. Even though he managed a very impressive average once again in the second round against Danny Noppert, he unfortunately lost 6-5.

Darius Labanauskas got a little further, as he reached the fourth round (last 16). Along the way he beat Davy van Baelen, Jamie Hughes and Diogo Portela. In the fourth round he lost 6-3 against Ian White.

Marko Kantele, unfortunately, lost already in the first round, as he lost by 6-5 against Keegan Brown.

The entire event was won by Krzysztof Ratajski. This was his fifth title in the PDC.

Marko Kantele, however, got himself back on the map at Sunday, as he reached the fourth round. He won against Josh Payne in the first round, then he beat Simon Whitlock in the second round and in the third round he averaged 103.2 in his 6-5 victory against Conan Whitehead. This was the sixth highest average of the day. Unfortunately he averaged only 83.0 in the fourth round and lost 6-1 against Cody Harris.

Darius Labanauskas did not manage to follow up on the great result from Saturday, as he lost already in the first round against Martin Schindler by 6-3.